The Path to Overcoming Adversity: A Complex Puzzle

For Canes Camil, working at Bon Sel was part of “a puzzle where each of its pieces was somewhere, and at the right time, the pieces came together to give a complete picture.” Described as “called” by colleague Jim Reimer, Director of the Haiti Salt Project, Canes sees his work at Bon Sel as an integration of his technical capacities as an electromechanical engineer and a deep commitment to his faith. His pathway out of adversity is the culmination of years of educational support by myriad people and organizations, a return to Haiti after receiving education in the US, deep commitment to accompanying Haitian youth, and relentless determination to overcome adversity and empower other Haitians, and especially children, to do the same.

Canes’ story begins in Hinche, where he grew up in a family of eight. The costs of his schooling were covered by the Xaverian brothers, a Catholic group committed to educating high potential individuals in Haiti through paying for their education. During the year before Canes would attend college for a fully funded degree in electromechanical engineering, a former English teacher requested his involvement in Maison Fortuné, an orphanage in Haiti which provides legal guardianship and education for all children within its walls. Here, Canes taught English, helped with homework, and encouraged students in their studies. In 2010, after progressing through college, the devastating earthquake in Haiti made continuing college in Haiti implausible. Canes nonetheless received sponsorship from the Xaverian brothers to successfully finish his studies at Siena College in the US.

After completing his studies in the US, Canes returned to Haiti, where he has devoutly committed to serving Haitian people, especially children. His Christian faith calls him to “[help] others in any way [he] can,” and he believes strongly in paying forward the support he received to current students in Haiti. According to Canes, “My late English teacher, Brother Harry, always taught us to give free what we received for free, just as Jesus taught his disciples. And during my time in the United States, Dr. Pattricia taught us how to pass it on. So I am indebted to others.”

Canes received an opportunity to leverage his talents for the good of the people of Haiti when, after three years of unemployment, Brother Michael McCarthy of the Xaverian brothers described a new open position at Bon Sel and asked for Canes’ interest, to which Canes “immediately answered YES.” Gilbert (Chip) Wirth, senior advisor of the Global Center for the Development of the Whole Child (GC-DWC)’s social enterprise initiative, had known Canes through his work with youth at Maison Fortuné and played an instrumental role in the request for Canes’ involvement with Bon Sel. Canes’ strong inclination to the position was driven by Bon Sel’s mission. According to Canes, “Although I didn't know Bon Sel before joining the team, it was its motto ‘In the name of Christ, we fight lymphatic filariasis and iodine disorders’ that drew me to Bon Sel...It is like the mission of Christ on earth who healed spiritually by giving eternal life and physically by healing the sick.”

Canes’ service to others in the name of his faith expands beyond his work at Bon Sel. In addition to his leadership at Bon Sel, Canes runs a youth Bible and English club every afternoon after work in his neighborhood. He also helps youth in his neighborhood to defray the costs of schooling, paying forward the education and support he received.

For Bon Sel, Canes is a cornerstone of operations. Although Canes is technically adept, at one point inventing a brine filter that was key to progress at the plant, his biggest skill, and rare gift, according to Jim is his leadership ability. In this position, Canes motivates his team daily, starting with morning meetings in which prayer, song, and safety messages are shared. The team meetings emphasize that “this is more than a job. This is us doing the Lord’s work to help our country.”

The Haiti Salt Project, a social enterprise initiative, is a part of the GC-DWC that provides technical and financial support to Bon Sel, a Haitian company. Bon Sel seeks to eliminate lymphatic filariasis (LF) and iodine deficiency disorders (IDD) through fortifying salt, all while improving the lives and livelihoods of Haitians. To date, working with many partners, it has helped lower the number of communities in Haiti in which LF is present and decreased iodine deficiency throughout Haiti while building capacity and expertise within the Haitian workforce, especially in middle management where operating capabilities are crucial but in short supply. Through leveraging a social enterprise model and market forces, this program sustains pathways out of adversity, enhances sustainability, employs Haitians, and empowers Haitian people to be catalysts for positive change.

Canes’ commitment, leadership, and expertise has energized and enabled this project to achieve results and change lives. Just as the compassion and care of others sustained Canes’ education and call, so too does Canes pay forward this compassion and care, through his work at Bon Sel and his service to his community, for the health and education of Haitian youth. For both Bon Sel and Canes alike, this incorporation of Canes into Bon Sel’s efforts represented a key piece to a puzzle rooted in a calling to help others and a drive to make sustainable positive change for the people, and the future, of Haiti, through an unending belief and commitment to their sustained potential. 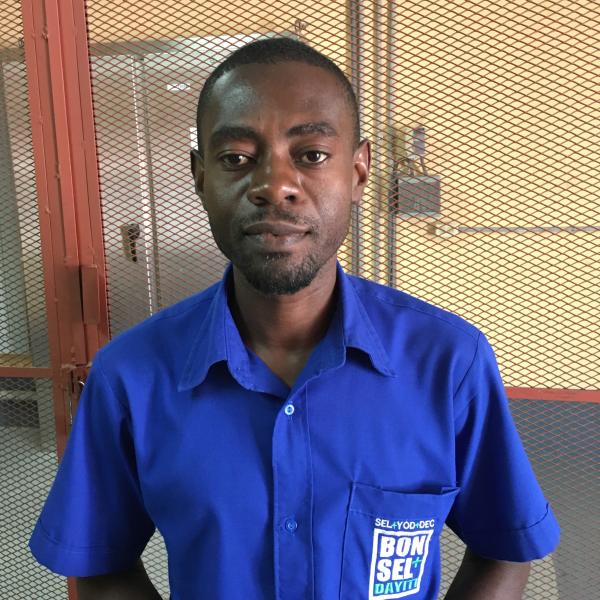