Positive Parenting : What does the evidence say?

We hear the term quite frequently: positive parenting. But what does it actually mean? Parents and caregivers are a child’s first teachers, and they play an important role in their child’s development from the very start. The ways in which parents raise their children have a long-term impact on children’s development and resilience. While this may seem like a lot of pressure, positive parenting is an evidence-based way for parents to raise their children to be resilient, empowered, and fulfilled individuals.

What does the evidence say?

We find this parent-oriented article by Heather S. Lonczak, Ph.D., to be a helpful resource on what positive parenting is and all of the evidence and research supporting it: What is Positive Parenting? A Look at the Research and Benefits

How does the GC-DWC use this evidence?

The Global Center for the Development of the Whole Child Haiti team embraces a positive parenting approach in its Parent and Caregiver Workshops. The program, which consists of  ten weeklong modules, equips parents with interactive games and songs they can use with their children. Sessions unpack positive parenting videos that have been developed specifically for the Haitian context. These videos highlight the importance of social care, alternatives to harsh discipline, and school readiness practices. Over the course of the ten sessions, parents unpack a variety of themes including the importance of the parent-child relationship; consistent and responsive care; cognitive and social and emotional development connection; self-regulation, discipline, and corporal punishment; well-being and self-care; and nutrition.

What is our impact?

While concrete evidence for the impact of our Parent and Caregiver Workshops is still in process, anecdotal evidence indicates positive impact:

What tools and resources do we have?

Our series of positive parenting videos, tailored to the Haitian-context, are available in Haitian Creole and for free online.

Shares practical insights and tips for how parents can integrate positive discipline into their daily lives.

shares ideas and tips for how parents can integrate learning into everyday life and prepare their children for future success.

To increase and extend positive parenting practice throughout Haiti and build on current programmatic success, the GC-DWC plans to further current programming primarily via two mechanisms: creating a parent ambassador program and scaling work from innovation to early adopter communities. The parent ambassador program will identify and engage parents who have completed the GC-DWC’s existing parent training program and will extend, through regular meetings, program buy-in and reach to other parents throughout their communities. The GC-DWC will also grow and adapt its parent training programming from its five pilotcommunities in Haiti  in which programming is currently in place, to expand to ten additional communities in Haiti. 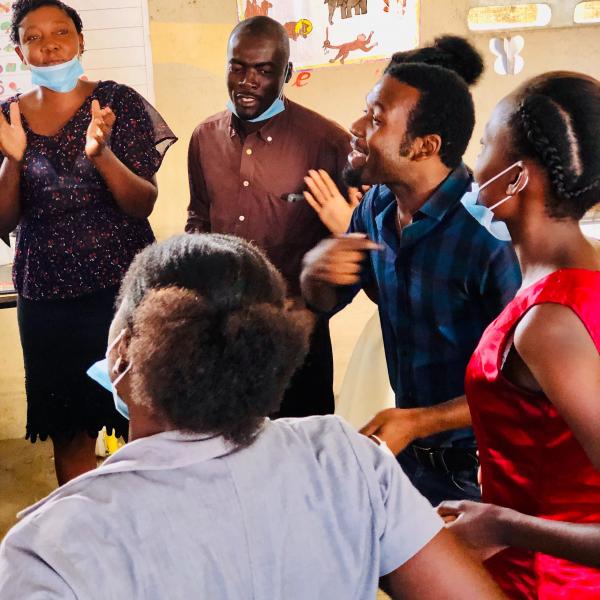