This is the second blog in the mini-series “Honoring and Leveraging Students’ Home Languages in the Classroom.” In this blog, I introduce language and culture portraits as a method for learning about and affirming students’ diverse linguistic and cultural identities.

The lively chatter of twenty-six undergraduate students filled the quad at the University of Northern Colorado on a sunny fall afternoon. The students faced one another in two concentric circles, each pair of students taking turns presenting their colorful language and culture portraits and explaining the different facets of their identities:

“I put Tagalog in my head because that is the language that I think and dream in.”

“I colored Haitian across my entire body because it shapes every part of who I am.”

“The final language I included is German. I do not speak, understand, or write in German, but it is the culture of my family. I have very vivid memories of my Great Grandpa singing to me as a child in German, so I colored it in my heart because it’s something I like to keep close to me.”

What is a language and culture portrait?

A language and culture portrait is a visualization of a person’s linguistic and cultural identity that involves (1) identifying the languages/cultures that are part of one’s identity, (2) assigning each language or culture a color, and (3) mapping those colors onto the image of a body silhouette. Colors can be mapped onto the body outline literally or symbolically. For instance, a student might map “Mandarin” onto their mouth if it is the primary language that they speak (literal mapping). Or, they might map “Spanish” onto their feet to demonstrate that speaking Spanish has enabled them to travel to countries where Spanish is spoken (symbolic mapping).

This activity—traditionally focused only on language—originated as a research methodology in the 1990s to explore the multilingualism of young children in Germany (Neumann, 1991; Krumm & Jenkins, 2001). It has since been extended to a range of global contexts and issues, including research problematizing the classification of students by their first languages in South Africa, exploring how youth at a Canadian French International School conceptualize plurilingual and pluricultural competence, and examining the emotional dimensions of language learning with pre-service teachers in the UK (see Busch, 2018 for a review of language portrait research). While the original method/activity focuses solely on language, I have found it useful to extend the exercise to include culture, broadly defined, so that students can also consider how their ethnicity, race, nationality, and religion (among other facets of their identity) shape their experiences and understandings.

How do you create language and culture portraits with students?

What are some examples of language and culture portraits?

Language and culture portraits can be used at any grade level and are a great way for students to encounter one another in new ways. I’ve often had students share that they had no idea their peer spoke a particular language or had a certain cultural background, as many of these facets of our identity do not emerge in everyday conversation. This activity can be particularly powerful for culturally and linguistically diverse students, as it affirms and makes visible their multifaceted identities and experiences.

I have used language and culture portraits in my research with young bilingual learners in the U.S. and Mexico and in my teaching with pre-service and in-service teachers. For example, at a bilingual school in Mexico, I engaged third and fourth grade students in this activity to learn how they were conceptualizing their emerging bi/multilingualism and to gain a deeper understanding of the intersectional facets of their identities. In sharing her portrait, fourth grade Diana (pseudonym) explained that her hands were English since she primarily used English at school (for reading and writing), but her face was Mexican/Spanish because those were the parts of her identity that were the most visible (see Figure 1). She also included Huichol, a local indigenous language, and explained that she spoke the language with her mother, so it was mapped onto her body’s core. She colored her heart Chinese because she loved learning new languages and was beginning to learn Mandarin using the app Duolingo. And, finally, she colored her legs and feet Catholicism to represent that she was rooted in her faith. A powerful representation of her linguistic and cultural identity, indeed! 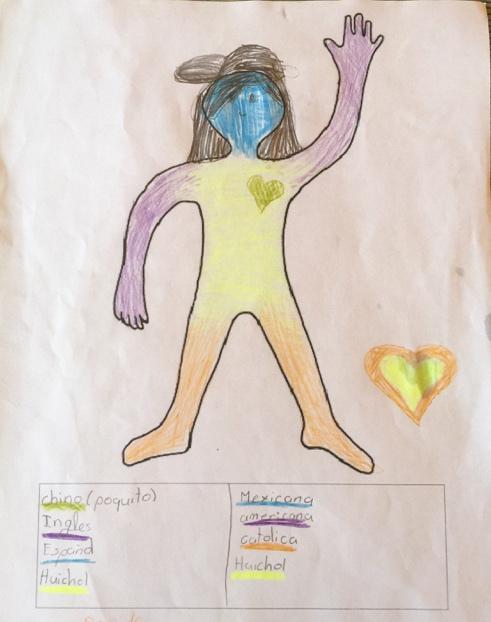 In the United States, I conducted this activity at a second-grade school with a two-way immersion program, a bilingual education model that serves both majority language and minority language speaking students. Since my research was focused on how emergent bilinguals make sense of their language learning experiences, I decided to have students reflect only on language for this activity. In their language portraits, students revealed much more complex identities than the programmatic labels assigned to them (“native English speaker” or “native Spanish speaker”). For example, Emma (pseudonym) shared that, while English was the dominant language in her body, Spanish was increasingly becoming an important part of her identity, especially when engaged in the school-based activities of writing, listening, and thinking, as reflected by the blue color in her language portrait (see Figure 2). She also included Portuguese, which was not a language she spoke, but was a language connected to her heritage (her mother was Brazilian). As she frequently watched Brazilian soccer games—and was an avid soccer player herself—she mapped Portuguese onto her soccer shorts and her foot, revealing the intersectional ways that language connects to other facets of our identity. 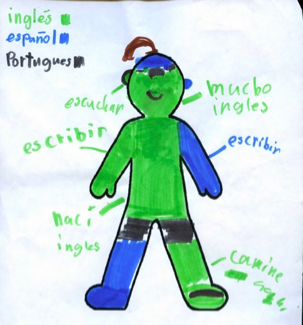 Finally, as I shared at the beginning of this post, I frequently use language and culture portraits with undergraduate and graduate students, both as a meaningful introductory activity and to model a pedagogical practice that I hope my students will take up in their (future) classrooms. When not using this activity for research purposes (where participant anonymity is required), I prefer to use students’ actual pictures rather than a stock body silhouette, as I find it to be more powerful for students to map their languages and cultures onto their own images. There are a range of apps (e.g., Clip2Comic, Tiny Scanner) that can quickly convert a picture to a black and white coloring page. I take students’ pictures on my phone at the end of one class and then, the following week, bring the printed black-and-white versions to class for the activity.

One particularly powerful language and culture portrait came from Nisrine, a pre-service teacher I taught at the University of Wisconsin (see Figure 3). In a reflection she wrote following the activity, she poignantly captured the ways that her languages and ethnicity shaped her identity:

I included both languages and ethnicities in my language portrait. My hair/head is Arabic, English, and Spanish because I've studied Arabic and Spanish formally in school through language classes, and because I primarily use English in my current classes. They are also in my head because, although I think in English, Arabic and Spanish are always in the back of my mind. Also, many of my students speak Spanish and a few have spoken Arabic, so I also think a lot about ways I can share in these languages with them. The sweater I'm wearing is English because, although this is the only language I speak fluently, I often wish it wasn't - sometimes I wish I could take it off. My arms, necklace, and heart are Tunisian (relating to the ethnicity and the language) because my ethnicity means a lot to me, and I sometimes feel like people don't always see it - like it's covered up by the sweater.

Nisrine’s reflection reveals how we carry our languages with us, even when they are not visible, and that the dominant language and culture can obscure the richness of our diverse identities and experiences—covering them up like a sweater. She also demonstrates how languages connect us to one another, as in her example of being able to bond with her Spanish- and Arabic-speaking students because she spoke their languages. 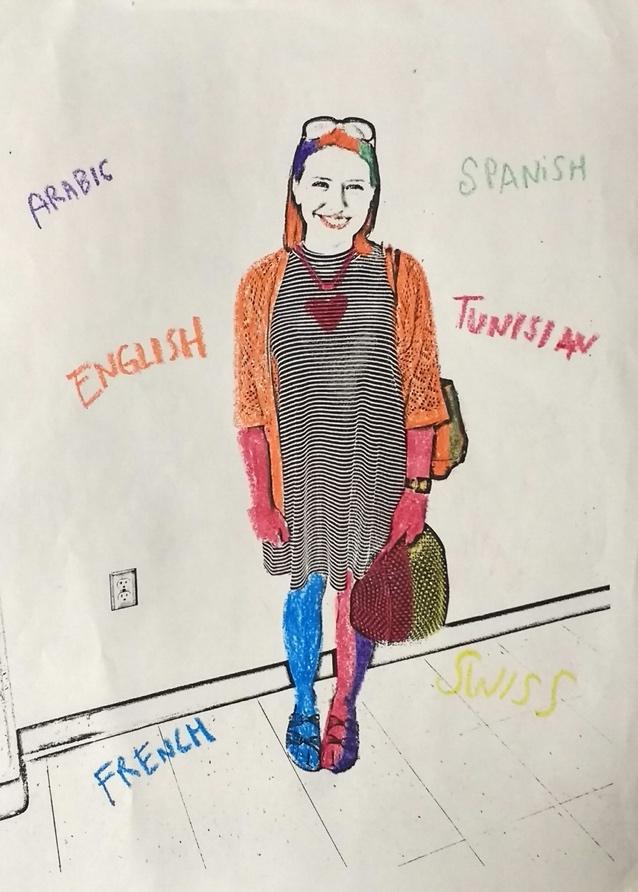 In closing, I encourage all educators (at any level) to consider how you might incorporate language and culture portraits into your classrooms. This simple activity provides an avenue for connecting with one another on a deeper level than typically afforded in everyday classroom interactions and allows us to recognize one another as the linguistic and cultural beings that we are. 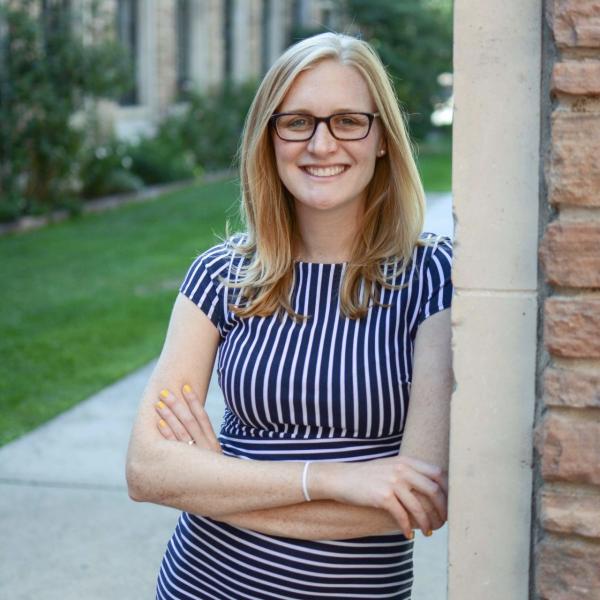