“Making Hope and History Rhyme: Words That Will Echo Forevermore” (2 of 4)

In the first of four blogs in this series, I introduced our 4th/5th grade expedition, “Making Hope and History Rhyme: Words That Will Echo Forevermore,” which we hope you will read to gain a comprehensive view of the expedition unit.

Our twelve week expedition explores the history of the United States through poetry and the spoken word. Poetry, speeches, and stories make us: think, feel, and act. We focused on poems and speeches that speak for the voiceless, the marginalized, and the “left out” of the “American Dream.” Our primary focus was on the Black experience in America, as told through poetry, poets, and speeches. We began with the American Revolution. From there, we explored the voices and lives of Frederick Douglass, Harriet Tubman, and Sojourner Truth. Next, we studied the poetry of Emma Lazarus, Langston Hughes, and Maya Angelou. Lastly, we studied the commitment to radical compassion and peace in the words and actions of Dr. Martin Luther King Jr. and Father Daniel Berrigan. On the last leg of our journey, we explored Nelson Mandela and Amanda Gorman. These experiences, stories, and poets intertwine and share a deep connection with each other, and the “promise of America.” Our unit was organized into case studies and for each case study, we focused on: the content of the poem/story/person/speech (what did they teach us? What can we learn? What can we do? ), the elements of poetry conveyed (what makes this a poem?), why did this person write/say this?, and what makes this person a moving speaker? (what does a good speaker do?) Ultimately, this led us towards writing our own poems and delivering them, based on: content, elements of poetry, inspiration, and delivery.

For this case study, we read Sojourner Truth’s Step-Stomp-Stride, “Ain’t I A Woman?”, Frederick Douglass’ speech “What to the Slave is the Fourth of July?”, and Before She Was Harriet, a poem about Harriet Tubman. We read about the many atrocities against slaves, people of color, and women. These are just a few of the people who were left out of the Constitution’s protection and promise, which we focused on in our first case study. In response, they fought with great courage for their voice, and the voice of thousands of others, to be heard.

We learned how Sojourner Truth boldly spoke out against false accusations of women being too weak and too untrustworthy to vote, as alluded to in her notorious speech, "Ain't I A Woman?" By Sojourner Truth. Sojourner Truth's Step-Stomp-Stride tells her story in poetic language, and conveys clearly what makes her a radical speaker. In addition to learning her story, the focus while learning about Sojourner Truth was twofold: One, what did she do and say? Two, what makes her a great public speaker? From here, we built a criteria list of what makes a good public speaker. We had notes such as “repetition”, “asking questions that make you think”, “speaking the truth” and “BAM! BAM! BAM! Banging fists!”

Creating a criteria list and thinking critically about what makes a good speaker was important for us because we were heading in the direction of presenting what we’ve learned and reading our own poems out loud to an audience. This gave us a starting point, to slowly build ideas about presentation, rather than one day saying “oh hey by the way, my young shy student who can’t be heard speaking over a mouse, you’re going to read this poem in front of 100 people next week, good luck!”

During this case study, we also carved out time for independent research reading on the topic, and reading My Name is Truth in our class book club.

My Name is Truth 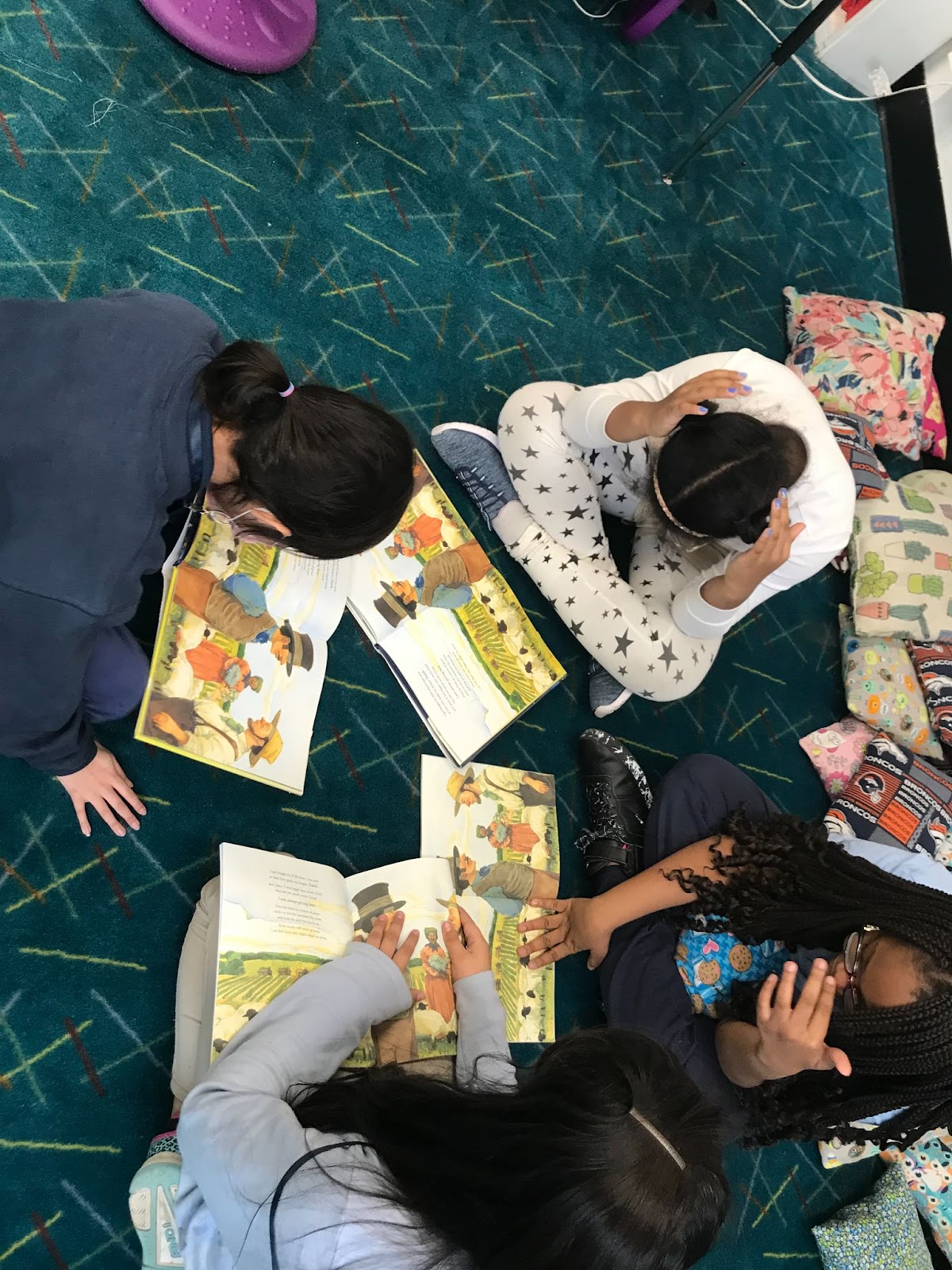 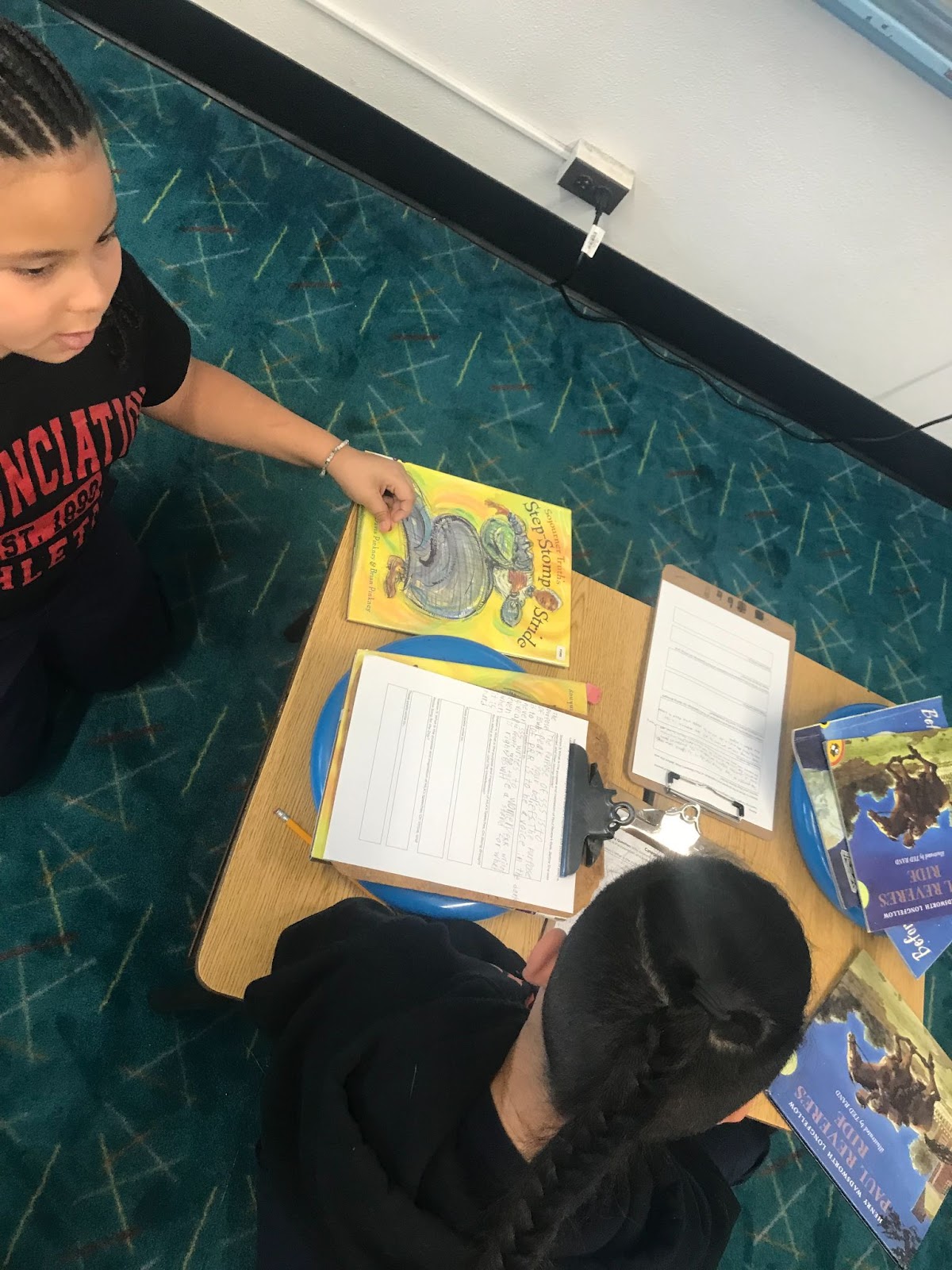 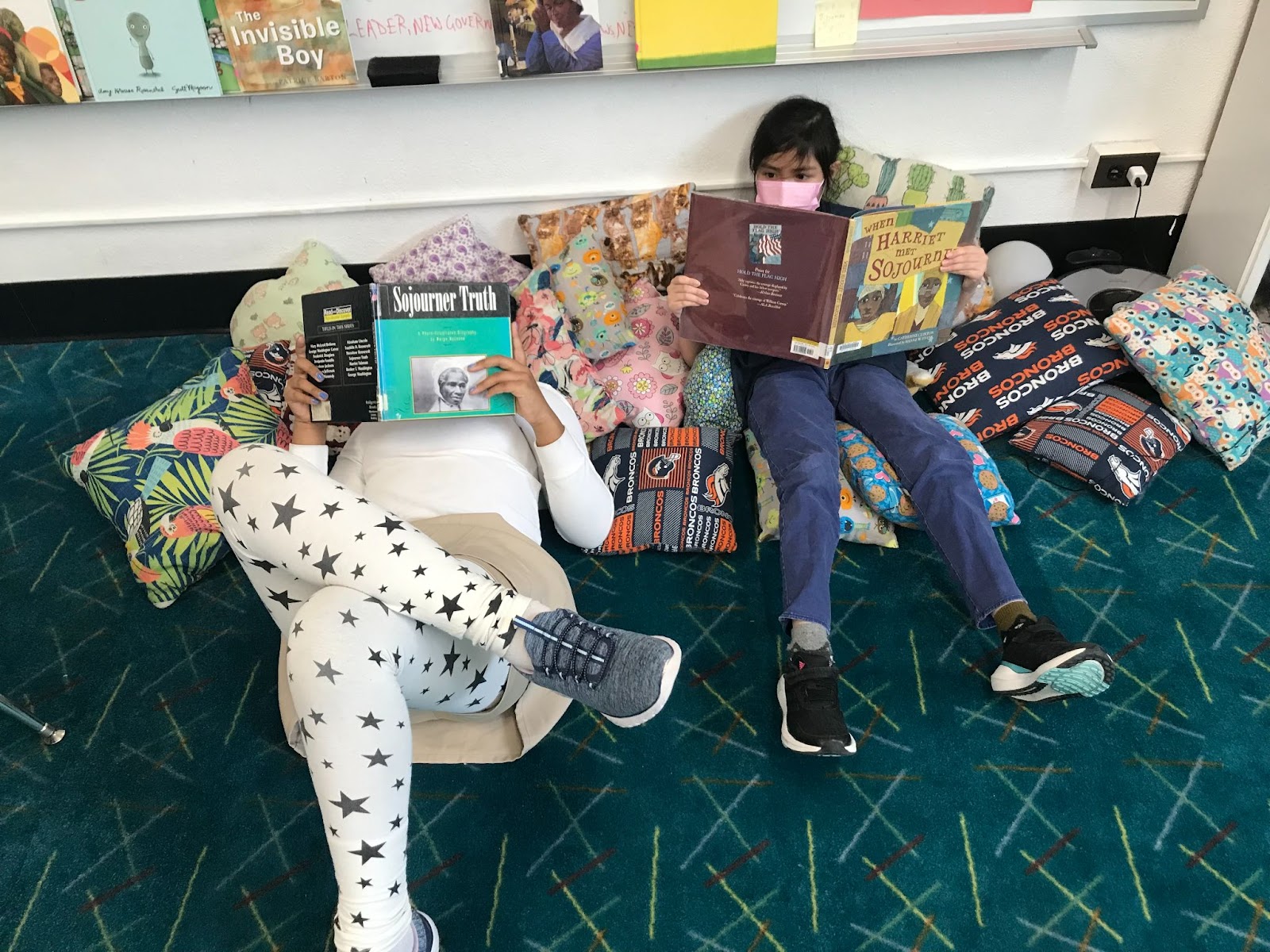 As stated with Phillis Wheatley, I believe it is important, especially for our young girls of color to hear this message loud and clear: Black women across American history changed this country, and challenged this country, to grow in becoming more inclusive. Studying Truth’s speech and story is important, too, because it concretely connects to the outcome of the Revolution. As a suffragist and an abolitionist, her work correlates directly to the shortcomings of the Constitution: Freedom of all slaves and granting women the right to vote. Her action teaches us how to respond to the shortcomings of the Constitution: respond with courage, care and tenacity.

Streamlining the focus lesson to lesson, unit to unit, made it more understandable for the kids, which allowed them to grasp and dig into the material.

Next, we transitioned to Frederick Douglass, speaking out for the forgotten slave, and Fourth of July, in front of the President. Again, this is a clear cut connection to our prior unit. What is the 4th of July? It is the celebration of the Declaration of Independence, a celebration of “life, liberty, and the pursuit of happiness.” It is America’s birthday, the day a country could live out its creed that “all men are created equal.” But is it? Not for the slave, not for women, in 1852. And Douglass had the charisma, the courage to state this. This speech embodies who we want to be as a Catholic community, to speak for, to be with the “wailing” the “mourning” “the whipped” “the forgotten.” To not forget them, as Jesus demands of us in The Last Judgment. 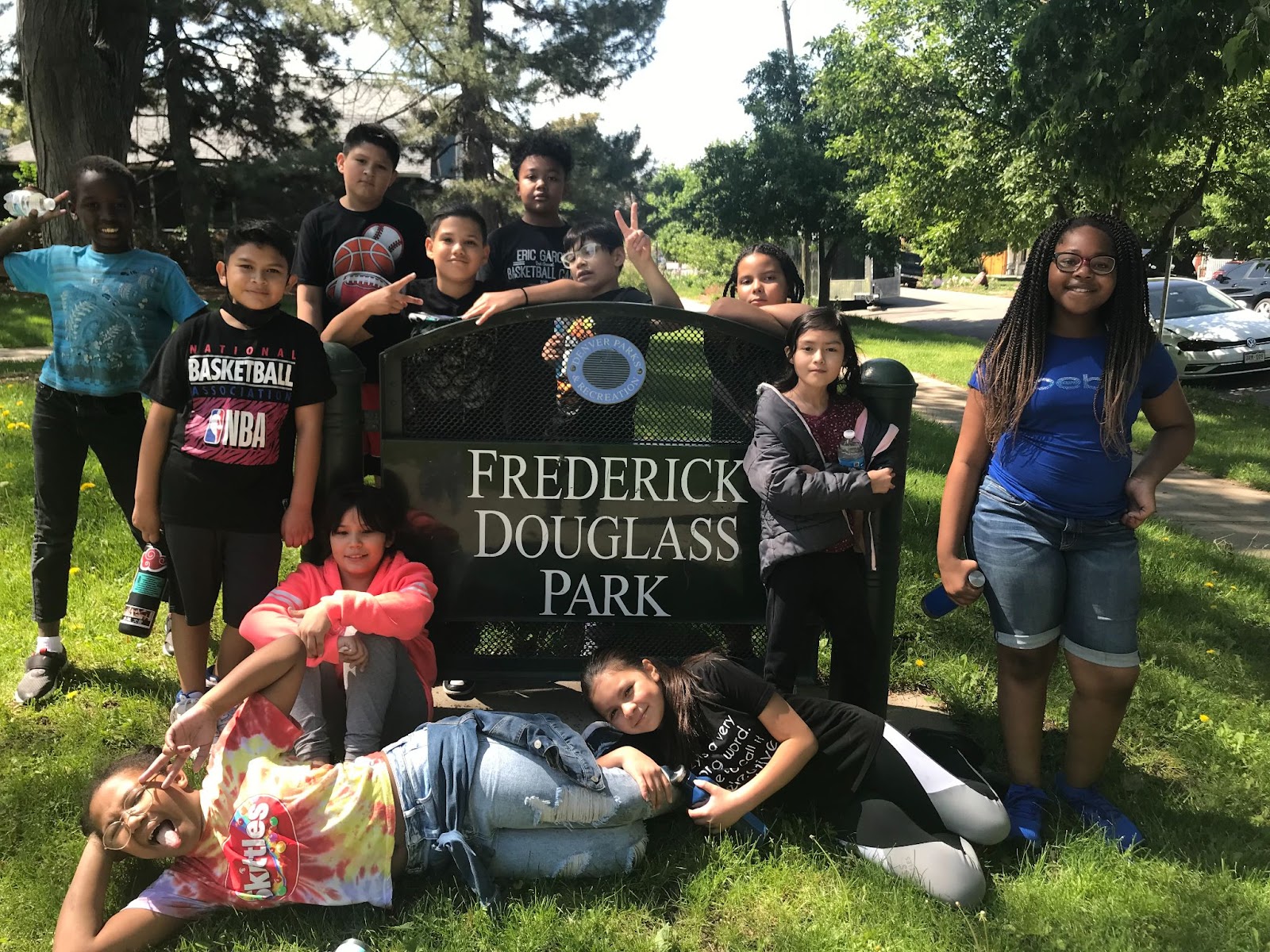 Frederick Douglass’ story also overlaps many of our prior studies. For one, he was a Suffragist and an Abolitionist, along with Longfellow and Truth. He stood up and spoke in such a way we want to embody, like Truth, so we added to our criteria list of what makes a high quality public speaker. Lastly, his story, along with many others, exposes the atrocities of slavery. One, he had to wrestle a master who viciously whipped him, who wanted to “break” him. Two, by law, he was not allowed to read or learn to read. Like Booker T. Washington in More Than Anything Else, and like Pinkus Aylee in Pink and Say, the burden, the challenge, the danger of reading came at such a high cost. Our reading was anchored in reading the speech, but we also took time to build background knowledge on who Douglass was, and why his speech was so relevant at the time.

More Than Anything Else

Pink and Say by Patricia Polacco 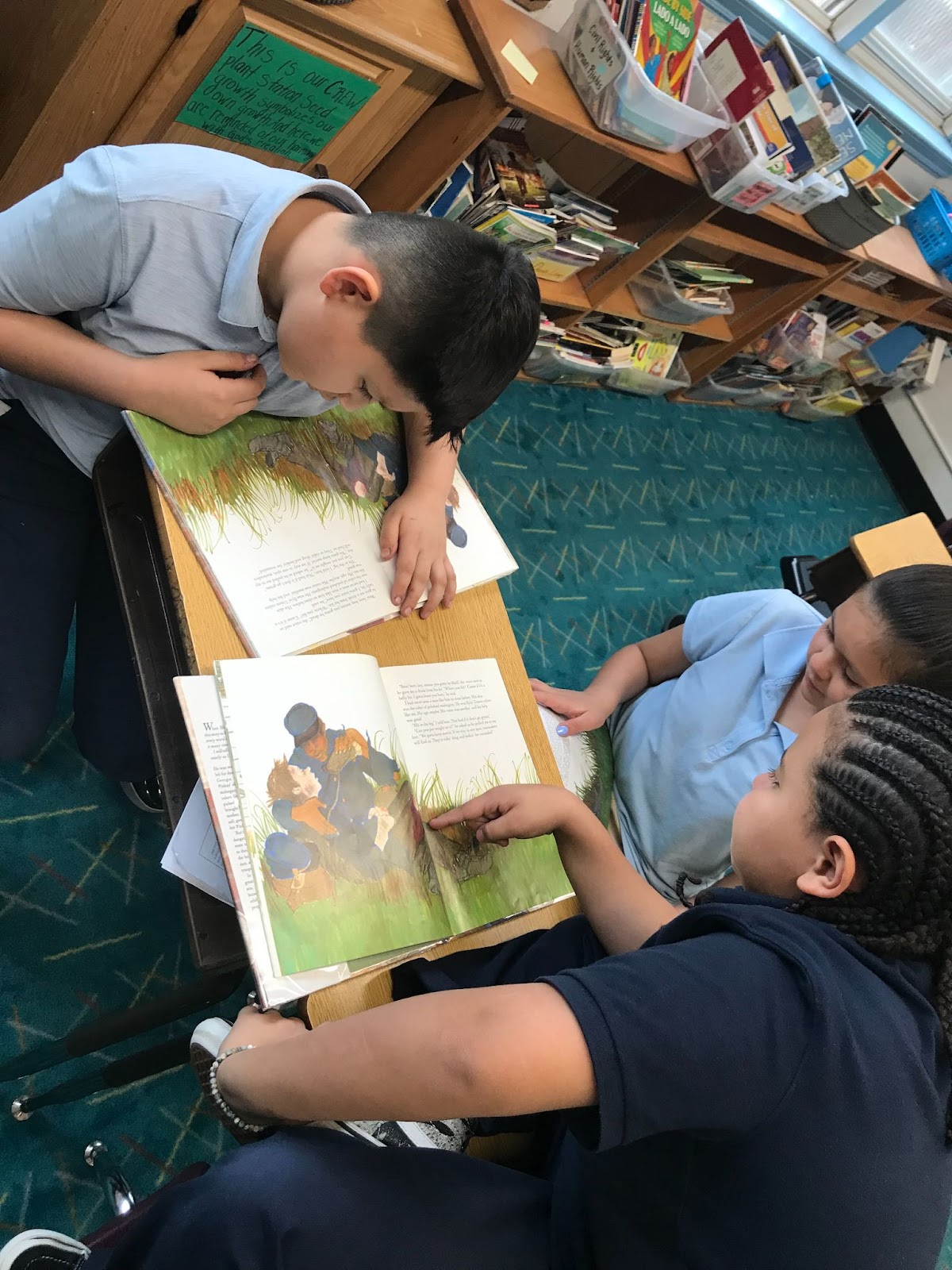 While reading Before She Was Harriet, there were a lot of lessons we pulled from this story: history content, Biblical content, geography, extensive vocabulary, elements of poetry, character traits, and connections to prior people we studied. She marched through the night towards freedom with “lion like courage” along with her family, as Moses did in Exodus.

Before She Was Harriet 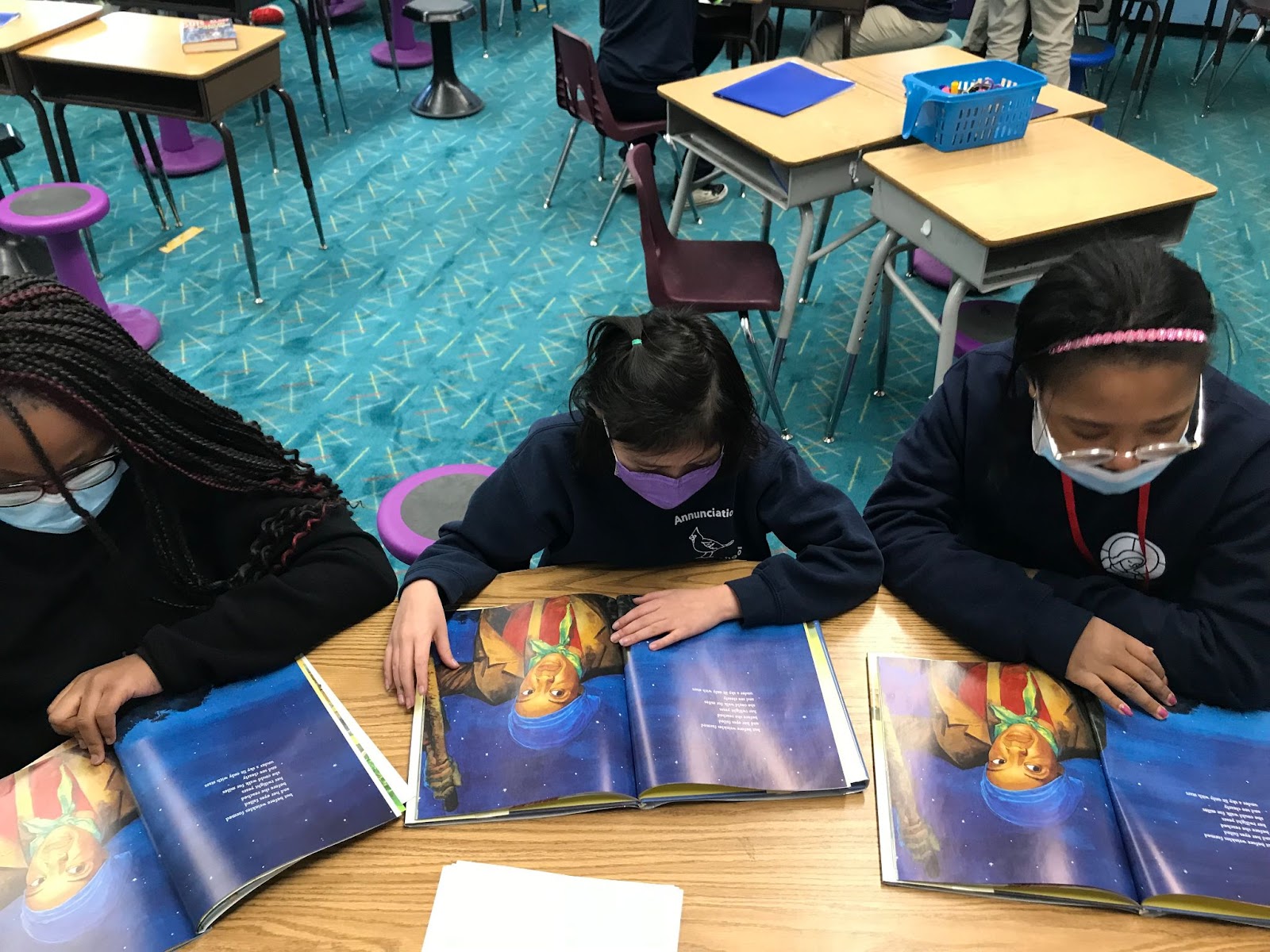 Harriet Tubman’s case study was the longest one of the year, because of how rich and interconnected her story, and this book, is. We started by building background knowledge, looking at pictures and maps, reading a letter Frederick Douglass wrote her, praising her for her work, reading Exodus, and learning her story. Next, we focused on the content of the story: Her character traits, “lion like courage” to lead people on the Underground Railroad, loyalty to her family to go back to them and set them free, bravery to lead a raid on the Combahee River. We studied her many “jobs” and what they meant: suffragist, nurse, spy, general, conductor, and what those jobs entailed. Next, we studied the elements of poetry in this story. We observed repetition, imagery, and alliteration in her poem. As this poem is written in free verse, we already had a firm grasp of the foundation of poetry to then see that it can also be more unstructured, and free flowing.

We discussed how poems can be used to pay tribute to epic people and their stories, tying this story back to our guiding questions: “Why do poets write? What inspires them?” Similar to why we created a criteria list of what makes a good public speaker, we also created a list of why poets write and what inspires them. Again, we built this list so that the students, when it was time for them to write their own poems, can pick a topic that inspires them with a particular theme, like Miss Cline-Ransome writing because she was inspired by, and wanted to pay tribute to Harriet Tubman. These different inspirations guided us towards our final product so that I did not get to a point and say “okay, write a poem about whatever you want” without much support or consideration of what guides you towards poetry.

The last component of this unit was returning to the Constitution and seeing what changed and what continued to change. In the lifetime of these three, the Constitution was changed. The 13th, 14th, 15th Amendments were added. The 19th Amendment was being pushed for. This tied together the overarching similarities between our three key figures: Sojourner Truth, Frederick Douglass, and Harriet Tubman. It also tied together our two case studies thus far. Our country is a work in progress. And post Civil War, who was still left out? What happened as a result? This led us to our next case study.

My deep hope for this case study is empowerment, especially in the face of the nastiness of circumstances. Our country is not a stagnant one that started on July 4th and everything has been set in stone since. Because of countless brave souls, barriers broke down, laws were lifted, and stories were told that brought us closer to what America “ought to be.” I hope our children see that they can do the same. Our country does a beautiful job of paying homage to a lot of brave men in our past. Walk around Boston and you’ll see statues and tributes to Paul Revere, John Adams, and John Hancock. Walk around Denver and you’ll see statues and tributes to pioneers and miners, soldiers and first mayors. We also need to pay homage to brave men and women of color in our country’s history.

My other hope for this case study was to bring stories to life. We hear about history, we read stories from the Bible at Church or in the classroom, but do we sometimes feel that these stories are outdated? A speech delivered to the President by a man of color about the 4th of July brings this story into focus with a new perspective. A woman of color breaking out of bondage brings a story from Egypt and Israel to the Mid-Atlantic, in our own country. Is it crushing that these things had to happen? Yes. But, my hope is that action leads to inclusiveness, compassion, and a recognition of human dignity. 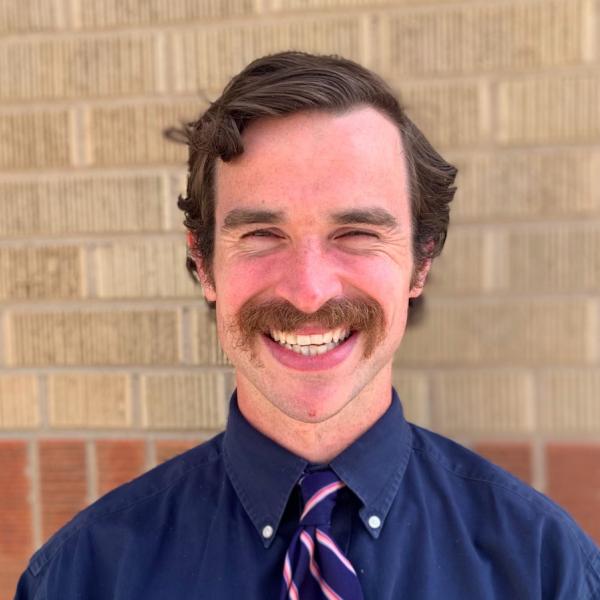