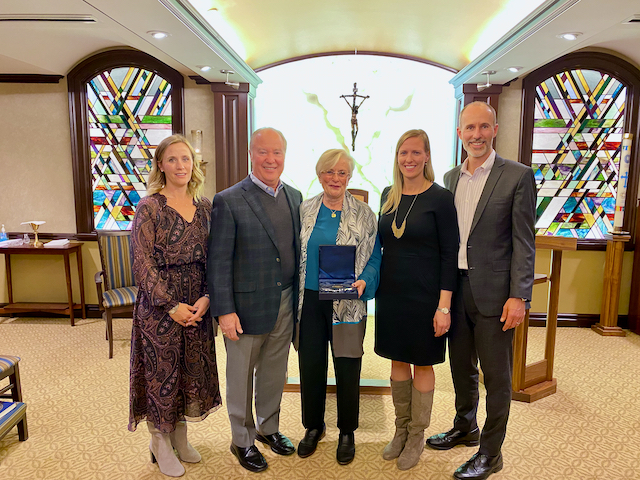 Karen and Mark Rauenhorst, longtime philanthropists and supporters of Catholic education, were presented the 2020 Notre Dame Award for Outstanding Contributions to Catholic Education following a Mass Friday evening on the campus of the University of Notre Dame.

The Rauenhorsts have dedicated their lives to strengthening Catholic K-12 schools and ensuring that as many children as possible have access to them. John Staud, the director of the Alliance for Catholic Education, and Rev. Lou DelFra, C.S.C., the director of pastoral life for ACE, presented the award. The Rauenhorsts were named the recipients last year, but the pandemic prevented ACE from recognizing them in person at the time.

“At ACE, we often think of Sr. Helen Prejean’s belief that we must watch what we do to see what we believe,” Staud said. “No two people personify this idea better than Karen and Mark. They have a tremendous belief in Catholic education, and it shows in the breadth and depth of the impact they’ve had on thousands of children’s lives in Catholic schools.”

The Rauenhorsts have given their time to Catholic causes nationally and locally in their home state of Minnesota. Karen Rauenhorst is the vice chair of the Catholic Relief Services Foundation, a member of the Board of Directors of the National Catholic Educational Association and the secretary of Foundations and Donors Interested in Catholic Activities, where she’s a member of the Catholic Schools Affinity Group and the Catholic School Philanthropy Working Group. She also served on the Board of Trustees at St. Catherine University, including four years as chair and acting president of the University from June to August 2016.

Mark Rauenhorst serves on the board of directors of Creighton University and the advisory council for Notre Dame’s Mendoza College of Business. He also serves on the board of directors for Catholic Relief Services, the GHR Foundation and the Ascension Catholic Academy, which supports three Catholic grade schools in North Minneapolis. He is the president of Marren Properties, LLC.

The Rauenhorsts are products of Catholic education and sent their four children to Holy Name of Jesus Catholic School in Medina, Minnesota, and Benilde-St. Margaret’s School in St. Louis Park, Minnesota.

ACE has worked with both the Better Way Foundation and the GHR Foundation, which have supported Higher-Powered Learning and the American Indian Catholic Schools Network. Higher-Powered Learning is ACE’s initiative to personalize education for students and teachers through the blend of technology and traditional classroom instruction. The American Indian Catholic Schools Network is a partnership between ACE and seven schools to bring Notre Dame’s resources in school leadership and academic development to schools that serve American Indian children.

ACE was founded in 1993 to respond to the growing need for high-quality education for poor, at-risk children in urban areas by improving the quality and accessibility of Catholic schools in communities across the country. ACE has since become the nation’s leading catalyst for the renewal and transformation of Catholic schools, serving hundreds of under-resourced communities both in the United States and internationally. It has succeeded in forming 2,500 outstanding teachers and leaders for Catholic schools in more than 100 (arch)dioceses.